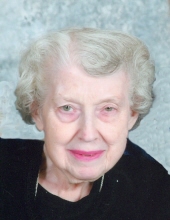 Betty Jean Farghum was born at home in Cresco, IA, on Easter Sunday, April 17, 1927, to Arthur William and Lydia Alma (Weber) Wentworth – the middle of nine children. When old enough, she started Sunday school at the Baptist Church in Cresco and on through her teen years at the Methodist Church in Ridgeway, Iowa.

She attended Cresco Public School through seventh grade, and then went to live with her Aunt Carrie Johnson in Ridgeway. (Her husband was deceased and her own daughter was leaving to be with her husband who was in the Navy.) Being a small town, her aunt owned the telephone company, and she became an operator on some evenings, weekends and holidays. She graduated from Ridgeway Public High School on May 17, 1945, and returned to Cresco soon after.

She started working at the Cresco Union Savings Bank in November. She was there for more than 3 years. She married Elmer Farghum on August 6, 1948, and moved to his home-place in Ridgeway the next February. Elmer had been working there since his discharge from the Navy. They moved back to Cresco when Elmer became manager of the Coryell Service Station. She soon started in the office of Goodrich & Lease Produce as a bookkeeper. She was there 9 years with a midway break of a year when her second son was born. Working 48-hour weeks, she caught an opening in the Cresco State Bank giving her more time for home and family. She was there 3 years before moving to Mason City in August of 1963 in time to get their sons registered for school. Elmer had already been working there for a year. She became a homemaker and chauffeur.

She did a lot of embroidery work before she was married and some sewing and crafts in her later years. Her family was her life and she and Elmer were very proud of them.

To send flowers to the family in memory of Betty Jean Farghum , please visit our flower store.