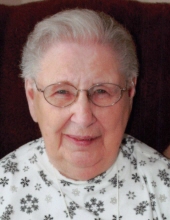 Betty was born to Clarence and Velma (Campbell) Froning on October 15, 1926, in Cedar Rapids, Iowa. She came to Sheffield, Iowa with her parents at age 2 years and spent most of her life in the surrounding area. She attended country school east of Sheffield through 8th grade then Chapin Consolidated High School, graduating in 1944.

On April 1, 1945, she married Robert Sjostrand in Evangelical Church Parsonage in Sheffield. They lived on Sjostrand farm east of Sheffield. Four children were born into this union: Phyllis Lorraine, Wayne Robert, Karen Kay, and David William.

Besides being a farm wife and mother, she was a cook at Sheffield Chapin School for over 30 years, retiring in 1997, but continued to sub for several years after.

Preceding her in death were her parents, husband, Robert; son, Wayne in 1952; and two daughters, Phyllis Nolte in 2011 and Karen Squier in 2011.

To send flowers to the family in memory of Betty J. Sjostrand, please visit our flower store.