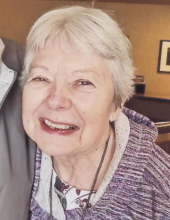 Betty Grace Theesfeld, 89, of Mason City, Iowa, passed away on June 29, 2019, at The MercyOne Hospice Inpatient Unit with her family by her side.

Memorials may be directed to MercyOne Hospice of North Iowa.

Betty Grace (Kramer) Theesfeld was born on June 3rd, 1930 near Swaledale to Peter and Martha Kramer. She was united in marriage to Edward Theesfeld on August 17th, 1948. To this union, 3 daughters were born.

She received her Cosmetology license in 1946. Later she worked at Damon’s Beauty shop, Nesbitt’s Salon in Clear Lake, and also owned her own salon for many years. Ed and Betty retired and enjoyed many trips to Florida and spending time with family and friends.
Betty was known for her beautiful flower gardens, taking care of others, and a smile that was always present. She loved her 6 grandchildren and 13 great grandchildren.

To send flowers to the family in memory of Betty Grace Theesfeld, please visit our flower store.