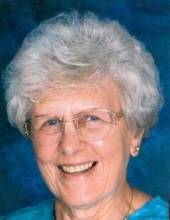 Bernice “Bunny” Garth, 85, of Mason City, died Thursday, October 12, 2017 at Country Meadow Place Assisted Living. Funeral services will be held 10:30 AM Monday, October 16, 2017 at the First Christian Church, 318 N. Adams with Rev. David H. Wagner Sr. officiating. Interment will be in Memorial Park Cemetery. Visitation will be from 4:00 to 7:00 PM Sunday at Major Erickson Funeral Home, 111 N. Pennsylvania Avenue and continue at the church on Monday one hour before services. Memorials may be directed to the First Christian Church or Country Meadow Place Assisted Living.

Bunny was born December 28, 1931 in Sharon Springs, New York the daughter of Marvin and Laura (Lane) Cummings. She graduated from Sharon Springs Central High School in 1950. Following graduation, she enlisted into the US Marine Corp. serving in the Corp. for 3 years. She married Richard “Dick” Garth July 31, 1953 in San Diego, California. Bunny was honorably discharged in August of 1953 and she and Dick moved to Iowa City, Iowa. After a short time in Clarion, they moved to Mason City in 1958. Bunny worked a number of jobs including Garth’s on the Lake restaurant, their family business. After the birth of her first granddaughter, Aimee, Bunny would stay home to care for her granddaughters. Bunny was a member of the First Christian Church, Mason City, since 1958. A few of her interests included, bowling, golfing, gardening, arts & crafts, board and card games, cooking, baking and following and supporting her husband’s high school and college basketball coaching.

To send flowers to the family in memory of Bernice "Bunny" Garth, please visit our flower store.