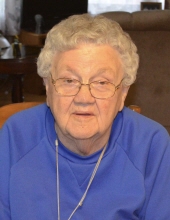 Barbara Jean Tyler, 92, of Mason City, passed away Thursday, October 28, 2021 at the Heritage Care and Rehabilitation Center. Per Barbara’s wishes there will be no services.

Barbara was born January 16, 1929 the daughter of Everett and Anna (Jones) Burton in Enterprise, KS. She was raised and attended school in Salina, KS. On August 20, 1947 Barbara was united in marriage to Warren D. Tyler. Following their marriage the couple moved to Mason City, IA.

For many years Barbara worked in the cafeteria at NIACC, she often "donated" meals to students in need. She retired in 1990.

Barbara’s life revolved around her three boys and later their families. She loved to travel and go camping. For
many years Barb and Warren wintered in Gulf Shores.

Barbara was preceded in death by her parents, husband, Warren on Oct. 5, 2011 and all eleven brothers and
sisters.

The family would like to extend a heart felt thank you to the staff at Heritage for all the loving and generous care
given to Barbara over the years.

To send flowers to the family in memory of Barbara J. Tyler, please visit our flower store.