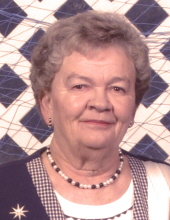 A gathering of family and friends will be held Monday, June 17, 2019 from 5 until 7 PM at Major Erickson Funeral Home, 111 North Pennsylvania Ave. In lieu of flowers the family requests memorials be directed to the Audrey Pappas Memorial Fund in care of the family.

Audrey was born October 18, 1936 the daughter of Calvin and Elsie (Jodschidt) Young in Mason City, Iowa. She attended Mason City Community Schools and graduated with the class of 1954. On July 18, 1954 Audrey was united in marriage to Alex John Pappas in Mason City. This July Audrey and John would have celebrated their 65th Wedding Anniversary. To this union three children were born.

Audrey and John really enjoyed going to their cabin in Aitkin, MN on Gun Lake to fish, feed the racoons and for some well deserved peace and quiet. She took great pride in working at Ben Franklin’s, K-Mart and First Citizens Bank. Audrey also became John’s right hand man in the landscape business.

To send flowers to the family in memory of Audrey Lavonne Pappas, please visit our flower store.