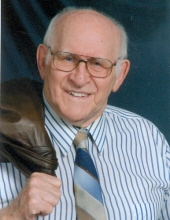 Arnold G. Holstad, 93, of Mason City, IA, died Monday, January 8, 2018, at Good Shepherd Health Center. Memorial services will be held at 11:00 AM on Thursday, January 11, 2018, at Trinity Lutheran Church, 213 N Pennsylvania Ave, with Pastor Kathy Graves officiating. There will be a gathering one hour prior to the service time at the church. In lieu of flowers memorials may be directed to Trinity Lutheran Church, 213 N Pennsylvania Ave, Mason City, IA 50401 or KCMR, 316 N Federal Ave, Mason City, IA 50401.

Arnold was born June 3, 1924 the son of Albert and Amanda (Roslien) Holstad in rural Worth County. He attended and graduated from Joice High School. Arnold was inducted into the United States Army on June 21, 1945 serving as a cook until his honorable discharge on November 18, 1946. He farmed near Myrtle, MN for a few years and later went to work at Builders Supply in Mason City. After 26 years of service to Builders Supply, Arnold retired in 1987. Following retirement he moved to Arizona.

To send flowers to the family in memory of Arnold G Holstad, please visit our flower store.