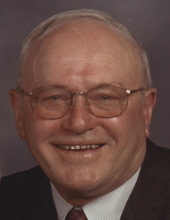 Arnold (Arnie) S. Pearson, 93, of Mason City, died on December 11, 2019 at the Mill Pond Care Center in Ankeny, Iowa. Funeral services will be held on Monday December 16, 2019 at 10:30 a.m. at Trinity Lutheran Church, 213 North Pennsylvania, with Pastor Kathy Graves officiating. Interment will be at Memorial Park Cemetery. A visitation will be held one hour prior to service time on Monday. Memorials may be directed to Trinity Lutheran Church or The Lime Creek Nature Center.

Arnold (Arnie) Sigard Pearson was born on a farm outside of Britt, Iowa, the son of Palmer and Ida (Oscarson) Pearson. Arnie’s parents immigrated in 1914 (Palmer) and 1921 (Ida) from Sweden, settling on the farm and raising three children – Astred, Arnie, and Eldon.

Arnie graduated from Britt High School and was in the Army for 18 months, serving in Heidelberg, Germany until he was honorably discharged in December, 1946. He was united into marriage to Violette Mae Eisberg in 1951 where they settled on a farm in rural Mason City. Arnie and Violette had three children, Ellen, Jeanne, and William (Bill). Arnie and Violette were very involved in their church, including Arnie serving as Sunday School Superintendent. The family was also very engaged in 4-H activities. The marriage resulted in divorce in 1973.

Arnie met and married Mary Fulghum Long in 1976. They lived on a farm southwest of Mason City for 35 years. Arnie and Mary enjoyed spending time with family and friends, often sharing a meal or coffee together with much love and laughter. Arnie specialized in making cinnamon rolls that accompanied the frequent cup of coffee. Arnie loved his family and keeping up with their activities. Arnie and Mary were always ready to lend a helping hand to anyone in need, visiting family members and grandchildren as often as possible. Arnie was thrilled to help with stepson Fran Long’s Christmas tree farm, driving tractor and specially designed wagon up and down the hill to provide rides for Christmas tree shoppers.

Arnie enjoyed tinkering with his tractors, and in his younger years totally overhauled his tractors during the winter months. He was delighted to be able to drive his Olivers in tractor cades across North Iowa. He discovered an enthusiasm for riding bicycle and would ride the trails around Mason City during warm months. His last bicycle ride was in Ft. Dodge at the young age of 91.

Arnie and Mary were devoted to each other in their 40 years of marriage. They loved camping in their pull behind RV as long as their health dictated. They were active members of Trinity Lutheran Church in Mason City as Stephen’s Ministers, providing communion to homebound members. Arnie ‘ran the elevator’ at the Trinity Lutheran Bazaar, and frequently read lessons during Sunday church services. Arnie always had a ready smile for people.

Arnie was preceded in death by his parents, Palmer and Ida (Oscarson) Pearson; his wife, Mary; son, William Pearson, and sister, Astred Schwab.

To send flowers to the family in memory of Arnold "Arnie" Pearson, please visit our flower store.