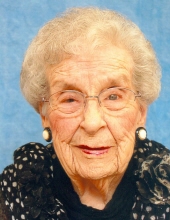 Memorials may be directed to the First Congregational United Church of Christ.

After graduating from Mason City High School in 1941, she was a telephone operator with Pacific Bell in San Francisco, California.

She was united in marriage to Harlan J. Searle on November 28, 1942, at the First Congregational Church in San Francisco. They later moved back to Mason City, and she continued working as a telephone operator with U.S. West (formerly Northwestern Bell) until her retirement in 1981.

Arnita’s passions included spending time with her family and friends, and she will be lovingly remembered for organizing and hosting large family gatherings. She was an excellent seamstress, and took great joy in playing the piano, organ and cello, as well as crocheting afghans for all her grandchildren. She was a former Board member of the North Central Iowa Genealogical Society, Women's Fellowship at First Congregational Church, Telephone Pioneers, and her card club. Arnita also took joy in teaching piano lessons, accompanying MCHS instrumental students at State competitions, and occasionally playing the organ for the First Congregational Church Sunday services.

She was preceeded in death by her husband, Harlan, in 2015, grandson in infancy, brother, George “Dick” Bruns, brother-in-law, Willis “Bill” Bramhall.

To send flowers to the family in memory of Arnita Mae Searle, please visit our flower store.