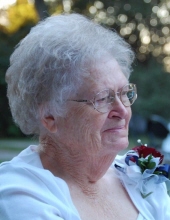 Funeral services will be held at 10:30 AM on Wednesday, August 15, 2018, at Trinity Lutheran Church, 213 N. Pennsylvania Avenue, with Rev. Dan Gerrietts officiating.

Memorials may be directed to the family of Arlene Cunningham.

Arlene was born August 28, 1926, in Ottosen, IA, the daughter of Oscar and Nora (Bakke) Johnson. She graduated from Mason City High School in 1945. On July 23, 1950, she was united in marriage to Warren H. Cunningham in Albert Lea, MN. Arlene was a homemaker who enjoyed spending time with her family – especially her grandchildren. She also enjoyed quilting, sewing, fishing, camping, attending baseball games and cheering for Hawkeye Basketball and the Atlanta Braves. She was a member of the Church of Jesus Christ of Latter Day Saints and the VFW Auxiliary.

She was preceded in death by her parents; her husband in 1973; a son in infancy; son-in-law: Joe Palmieri; 3 brothers: Virgil Johnson, Gene Johnson and Robert Johnson; and brother-in-law: Marvin Piippo.

To send flowers to the family in memory of Arlene M. Cunningham, please visit our flower store.