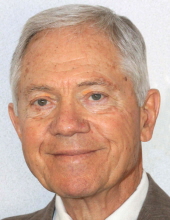 Aristotle George Pappajohn passed away peacefully in his home on December 24th at the age of 90. After being diagnosed with pancreatic cancer 20 months earlier, he continued living with the extraordinary faith, gratitude, gentleness and optimism that exemplified his entire life as an adoring husband, loving father, and playful Papou.

Aristotle “Tel” Pappajohn was born on a cold December morning in his house in Mason City, a few weeks after the market crash of 1929 and the beginning of the Great Depression. He was the middle child of Greek immigrants and grocery store owners George and Maria Pappajohn. In 1944 tragedy struck as his father passed away suddenly. Still a young teenager, Tel took on responsibility of the family store alongside his older brother John and younger brother Socrates, in addition to his pursuit of education. He went on to graduate from Mason City High School in 1947, followed by NIACC in 1949, and a B.S.C. from University of Iowa in 1952.

After finishing college, Tel began a remarkable 65-year career in the insurance business that he would never retire from. He started as a partner for Pappajohn Insurance with his brother, John in 1955. He then served as President for Snyder-Pappajohn, Century 21 Snyder-Pappajohn Mason City Realty, Inc., First Interstate Insurance of Iowa, Boatmen’s Insurance and Bank America Insurance of Iowa. He continued to serve clients at First Insurance Agency up until his passing. Tel redefined long-term relationship, serving the same clients continuously through consecutive retirements on their end while remaining a consistent trusted advisor on his end for decades. At one point, his clients spanned the country from coast to coast, yet he never lost his connection to his Mason City roots.

Family always came first for Tel, and as patriarch he cherished every opportunity to spend time and travel with his ever-growing clan. In 1960 he married Barbara Boosalis, and together they raised four children. With spouses and grandchildren he would host 24 under one roof and happily captain the grill with enough to feed an army. At his Clear Lake cabin, he taught his children, nieces, nephews, and more recently his grandchildren how to fish, capturing their attention with tales of his elusive nemesis, “el Carpo”.

Tel will long be remembered for his generous contributions to Mason City and his numerous mentorships in the insurance industry. His legacy of descendants will carry on his loving spirit. He is survived by his wife of 60 years, Barbara, his four children, Diana (Nick), Andrea (Kimathi), Caroline (Paul), George (Sarah) and his 14 grandchildren -- Chase, John, Evan, Aristotle, Frances, Zach, Natasha, Aristotle, Cooper, Torsten, Lucy, Jack, Rose and Thora; his brother John (Mary) Pappajohn, three sisters-in-law: Elaine, Georgia, Marina; 10 nieces and 4 nephews and their families. He was preceded in death by his parents and his brother, Socrates.

To send flowers to the family in memory of Aristotle "Tel" Pappajohn, please visit our flower store.