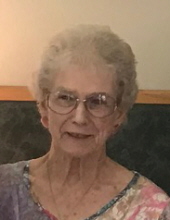 Anne Beard Madison Wallace, 94, of Mason City, died Sunday, October 16, 2022, at Crestview Care Center in West Branch, Iowa, where she was a resident. A celebration of life will be held at a date to be decided. There will be no viewing and inurnment will be in Springfield, South Dakota. Memorials in her name can be made to First United Methodist Church of Mason City, Iowa.

Anne B Madison Wallace was born in Holstein, Iowa, the fourth child of Dr John Vincent Madison and Anna L Beard on July 14,1928. Anne attended Washington High School in Sioux Falls, SD and went on to graduate from Morningside College in Sioux City, Iowa. There she met Charles Q Wallace whom she married on December 27, 1950, in Sioux Falls, SD. As a preacher’s kid, then a minister’s wife she was accustomed to the frequent moves that came with the job. She made homes for her growing family in East Dubuque, Correctionville, Cedar Rapids, Mount Vernon, Sioux City, and Mason City. Facing retirement, they chose to remain in Mason City where they had made a great many friends. Anne found opportunities to make a full life of activities including PEO, Women’s Society, Questers, Occidental study club, church committees, Prayer chain, and other volunteer service organizations. As church and family duties waned, she was always busy with some project or needlework. No longer sewing clothes or knitting hats, sweaters, and mittens for her children, she began to do counted cross stitch. She knitted sweaters for missions and made hundreds of babies warming hats for newborns at Mercy Hospital. She also utilized her expert sewing skills to create the costumes Chuck used for his first-person sermons. Chuck and Anne enjoyed travel. They hosted several tours to the Holy land and parts of Europe, visited family in the Bahamas, and enjoyed spending time at their cottage at Okoboji.

She was predeceased by her husband, her four siblings and her

To send flowers to the family in memory of Anne M. Wallace, please visit our flower store.