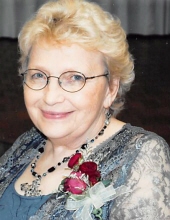 A memorial service will be held at 10:30 a.m. on Saturday, December 18, 2021, at Grace Church, 440 N Illinois Ave. Services will be livestreamed on the Major Erickson Funeral Home Facebook page.

Inurnment will be held in the Brush Point Cemetery at a later date.

Memorials may be directed to Grace Church.

Amy was born on January 18,1934. Her parents were Syneva and Leo Elthon (Lt. Governor of Iowa, 1952 – 1957) of Fertile, Iowa.
Amy graduated from Fertile High School. She attended Northwestern Bible College in Minneapolis, Minnesota. She then transferred to Iowa State College and studied Home Economics. While at ISU, Amy joined an on campus group, Intervarsity Christian Fellowship. It was here that she met her future husband, Wendell Mahoney. In the last quarter of Wendell’s studies at ISU, they became engaged. Wendell entered military service after graduation and came back home for the wedding April 3, 1955. The couple spend nearly 3 ½ years in the service moving 13 times to various military posts.

After leaving the service, the couple came back to Wendell’s family farm where they were involved in farming for nearly 50 years. Amy was involved in teaching Sunday school classes along with helping to manage the farm. She became the book keeper, banker, grain marketing specialist as well as purchaser of machinery parts while raising two children.
Later in life, the couple spent 19 years wintering in Mesa, Arizona. Upon retiring from farming in 2005, they moved to Clear Lake Iowa where they cared for Amy’s sister, and Alzheimer patient, until she passed away. They then moved to the Village Coop in Mason City, Iowa.

To send flowers to the family in memory of Amy Lou Mahoney, please visit our flower store.