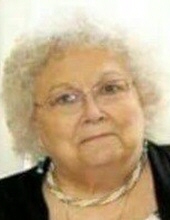 Alice Joy Olson, 76, of Mason City, died April 1, 2017 at the Muse-Norris Hospice Inpatient Unit in Mason City. Funeral services will be 11 AM Friday April 7, 2017, at Trinity Lutheran Church, 213 N. Pennsylvania Avenue, Mason City with Rev. Dan Gerrietts officiating. Visitation will be held from 5 to 7 PM on Thursday April 6, 2017, at Major Erickson Funeral Home, 111 N. Pennsylvania Avenue, Mason City. Visitation will continue one hour prior to the service time on Friday at the church. Those who wish to send memorials may direct them to the Alice Olson Memorial Fund in care of her family. Alice was born in Forest City, Iowa on February 4, 1941 and grew up there. As a teenager she met and married Lloyd “Whitey” Olson, a bond that lasted more than 50 years until his passing less than one year prior to hers. They raised their four children in Forest City and eventually Mason City, where she was a member of Trinity Lutheran Church. A woman of varied tastes, Alice was a gardener and a music lover and in her home she often could be heard singing along with everything from Motown to country to opera. For over 30 years Alice helped raise other Mason City children via her home daycare. She and Whitey were long-time members and golfers at Rockford Country Club. She worked at a diner in her youth, and holiday baking later became a passion for her – annually preparing dozens of treat varieties in “holiday care packages” that were widely distributed among her family, friends, and neighbors, and to her husband’s coworkers and clients across North Iowa. After retirement, the couple enjoyed their winters in Florida with their family, and spent summers in Mason City. Alice was a recent resident of Good Shepherd Health Center in Mason City. Alice is survived by her daughters Cheryl Hansen (Brian) of Ocoee, Florida and Debbie Hegland (Mitch) of Jewell, grandsons Eric and Isaac Hansen; granddaughters Danielle (Jacob) Fisher, Daisy and Darby Hegland; and great-granddaughter Beatrix Fisher. She also is survived by her sister Sandra Soma (Gilman) and her brother Terry Skjeie. Alice is preceded in death by her husband Lloyd; her parents Joyce and Albert Skjeie; her son Douglas Olson; her daughter Kimberly Olson; and her brother Earl Skjeie.

To send flowers to the family in memory of Alice Joy Olson, please visit our flower store.