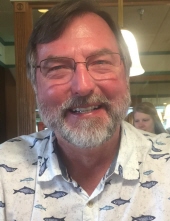 Visitation will be held from 4 until 7 PM Wednesday November 30, 2022, at the Major Erickson Funeral Home, 111 North Pennsylvania Ave.

David Todd Windmuller passed away in the early morning hours on November 24th. The last few weeks of his life were filled with visits from family and loved ones.

David was born on October 19th, 1957, to Donald and Ruth (Peters) Windmuller in Ames, Iowa. He was raised with his three sisters, Becky, Carolyn, and Kathy in Green Bay, Wisconsin. After graduating from Southwest High School in 1975, he attended Michigan Technological University to study mechanical engineering and graduated in 1979.

A year later he met the love of his life, Kimberly (Agan) Windmuller. They married on November 27th, 1982. Together they had three children, Nicholas David, Nathaniel James, and Kathryn Ann.

David started his career in Fort Wayne, Indiana at International Harvester. After a year, he found a new opportunity at Viking Pump of Cedar Falls where he started as a project engineer. He advanced through the ranks to become the President of Viking Pump. David’s leadership continued to grow and he soon became the President of Fluid Management in Wheeling, Illinois. As his knowledge of the business environment grew, he transitioned to the corporate offices of IDEX. While there, he served as the Vice President of Operations and then became a group executive. In this role he was responsible for over 3,000 employees as well as companies in Ireland, England, Australia, China, Germany, Italy, and the Netherlands. In the last 10 years, he owned and operated his own business, Line-X of Mason City, Iowa.

Everyone who has met David knows he had quite the sense of humor. No matter how bad his jokes were, you couldn’t help but laugh. He loved fishing and telling many (some true) stories of his epic battles with fish. He loved putting the worms on the hook for anyone who was willing, especially his grandchildren. David loved spending time with his family and watching the Packers. He was able to spend 40 years of marriage with his wife and watch his children grow to become adults and then parents.

He is preceded in death by his mother and father, Ruth and Donald Windmuller.

To send flowers to the family in memory of David T. Windmuller, please visit our flower store.