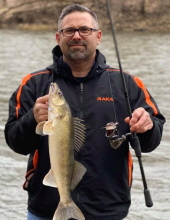 Adam D. Van Syoc, 43, of Mason City, died Friday, March 27, 2020 as the result of a tragic boating accident. Funeral services will be held at 1:30 PM Monday, May 11, 2020 around the pond at Major Erickson Funeral Home with Pastor Matthew Muters officiating. Interment will follow in the Elmwood-St. Joseph Cemetery

Adam was born April 6, 1976 the son of Dave and Peggy (Kuenstling) in Waterloo, Iowa. He was raised in Waterloo and graduated from Waterloo East High School in 1994. He made countless friends there and enjoyed playing football as a linebacker. He was proud of his many football accomplishments - including earning a scholarship to play for NIACC. After graduating, he moved with his family from Waterloo to Clear Lake, and that is when he stumbled across his future wife, Mandy Schmitt.

He continued on with his education at North Iowa Area Community College, earning his Associates degree in 1996. After graduating NIACC, he moved to Mason City with Mandy.

Adam and Mandy were married at Trinity Lutheran Church in Mason City on May 20, 2000. As the years went on, they were blessed with 4 beautiful children - Makenna, Kasey, Derek, and Danika. They would have celebrated their 20th wedding anniversary on May 20, 2020.

His main goal in life was to always take care of and provide for his family so he pursued a successful career in sales. Anyone who knew his sales abilities would say he was one of the best. We always joked that he could sell ice to an Eskimo. He thoroughly enjoyed meeting new people and chatted with everyone who crossed his path. He never left anywhere without making a new friend.

Throughout his sales career he worked at Pepsi, Kabrick Distributing, and most recently NMC/RAKA as a territory sales manager.

His wife and kids were the most important thing to him. They were his utmost pride and joy. Whenever they needed him, he was there. He loved supporting and watching his children excel in their activities, whether it be cheer, dance, track, baseball, or their artistic abilities. When his son, Derek, started to have an extreme passion for baseball, Adam made sure he was there to encourage him every step of the way. He spent countless hours practicing with Derek, coached his baseball city league teams, helped coach his travel team, umpired when needed, volunteered endlessly at the Holcim baseball complex, and joined the Mason City Youth Baseball Association board.

When Adam was not busy with one of his kids' activities or work, you would find him with a fishing rod in his hand and a line dropped in. He absolutely loved spending time on the water or ice with his many fishing buddies. He always had a good fishing story to tell, and was certain everyone was envious of his fishing skills. Teaching his children to fish also brought him much joy.

Rugby was yet another passion of his. He started playing for River City Rugby while attending NIACC. He was a member of the club for the next 25 years, coaching the team twice during that time. He was also very active with the Annual Old Boys Clash held each summer and this is when he introduced his children to youth flag rugby. Adam enjoyed every single minute he was playing on that field with his rugby brothers and he will always be "With You".

He was a huge Iowa Hawkeyes football fan, and would never miss a game, even if it meant listening to it on the radio. He loved having fish fry's, cooking his famous chili, cracking jokes, and busting moves on the dance floor. Adam excelled at everything he did. Always giving 110% and then some.

He will be deeply missed not only by his family and children, but also by the baseball community, the fishing community, the rugby community, his many friends, his co-workers and all of his clients. A terrible loss for the whole community.

Rest easy Adam, we love you, and we hope Heaven has enough fish to catch to keep you busy.

To send flowers to the family in memory of Adam D. Van Syoc, please visit our flower store.